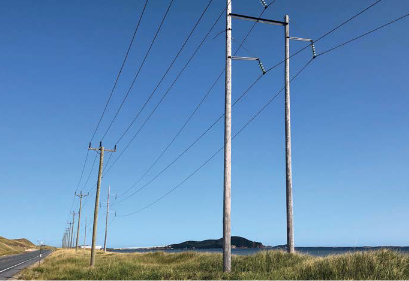 Hydro-Quebec held an open house on the project to rebuild transmission line 778, which carries electricity from Cap-aux-Meules to Grosse-Ile.

According to the Crown Corporation, the 45-kilometre infrastructure built in the early 1980s is nearing the end of its useful life and will be fully upgraded to today’s standards.

The work, which will be spread over two years between 2025 and 2027, should make the line safe for a period of 50 years.

Laurie Sabourin, community relations advisor, explained that the meeting was part of the pre-project phase and aimed to hear the concerns of citizens, organizations and elected officials.

The study area extends 200 metres on either side of the existing line to evaluate possible route improvements.

The Havre-aux-Maisons bay, the reconciliation of certain uses, erosion and the presence of rare animal and plant species are among the challenges identified by Hydro-Québec.

A first scenario could be presented by the end of 2022.

The project leader, François Larouche, mentions that contrary to popular belief, the burial of cables also has its share of technical and environmental pitfalls.

Hydro-Quebec says the process of rebuilding the line was planned before the frequent outages this winter, which mainly affected the distribution line.