In 2017, as numerous North Atlantic right whale deaths made the headlines, the Canadian government was forced to redouble its efforts to protect the species, notably to maintain its access to the lucrative American seafood market.

The following year, the aerial surveillance program for the species was set up, co-directed by marine mammal biologist Caroline Sauvé of the Maurice Lamontagne Institute.

Every good weather day between late April and October, she and her team take to the skies in a Cessna 337 or a Twin Otter to spot right whales moving through the Gulf.

Ms. Sauvé explains that when a specimen is observed, the aircraft approaches it to allow researchers to confirm its species and, if necessary, to take pictures of it and gather certain information.

She mentions that the appearance of white calluses on the animal’s head, as well as the shape of its tail fin and V-shaped blowhole, are characteristics unique to right whales, which also helps identify certain individuals.  Once the animal is spotted, the plane descends and circles overhead so that observers can take pictures and record information.

The objective of the program is not only to make an inventory of the endangered species, but also to study its movements and spatial distribution in the St. Lawrence, which serves as its food supply.

Caroline Sauvé highlights some preliminary findings from the aerial surveys. 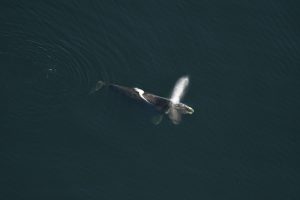 She reports that 115 specimens have been sighted so far in the Gulf in 2022, which is about one third of the overall North Atlantic right whale population.