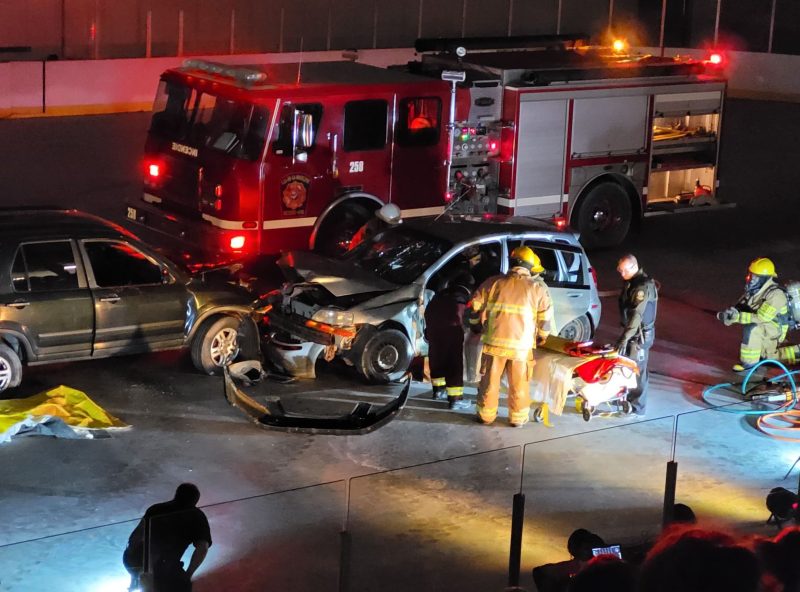 An awareness event created quite a shock wave at the Centre multisport Desjardins as more than 350 young people attended a surprise re-enactment of a fatal collision on Friday morning.

The objective was to raise awareness among students from the Carrefour jeunesse-emploi, the Centre de formation des adultes, the Madelinot campus of the CEGEP as well as Secondary IV and V about the consequences of alcohol, drugs, texting and speeding while driving.

Paul-André Leblanc, the instigator of the Impact project and a volunteer firefighter, explains that he was inspired by other initiatives of this kind organized in the province and that he adjusted the formula to local realities.

Approximately 25 volunteers were mobilized to recreate a full-scale traffic accident with one dead and several injured, including medical interventions at the scene, transportation to the hospital and notification of the parents.

The students did not know what to expect when they arrived at the Centre multisport Desjardins on Friday morning, where a fatal collision scene was waiting for them.

Speakers were then invited to detail their role in such a situation, and then gave way to heartfelt testimonials.

Paul-André Leblanc emphasized that beyond the potentially fatal injuries, the repercussions of dangerous driving behaviours affect a broad spectrum of people.

In addition to the Fire Department, the Sûreté du Québec and the CISSS des Îles, many partners contributed to the realization of the event, including the MNA Joël Arseneau, the Municipality and Ambulance Leblanc.