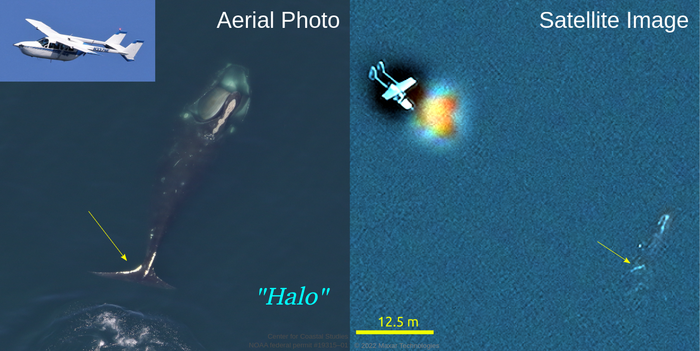 Fisheries and Oceans Canada is adding another string to its bow in the federal government’s efforts to protect the North Atlantic right whale.

Through its WhaleIdeas initiative, the department is funding research and the development of innovative solutions for the preservation of the species.

To achieve this goal, it intends to rely on the detection of specimens by satellite imagery.

Of the five projects supported, the one led by the University of Ottawa was published in the journal Marine Mammal Science.

Combining the resources of the Canadian Space Agency, artificial intelligence and the collaboration of a multitude of scientists, the new satellite imaging detection technology has a lot to offer.

So far, the research has identified right whales in the Gulf of St. Lawrence and, thanks to a spatial resolution of 15 centimetres, has been able to identify specimens recognizable by the markings on their backs or heads.

This is nothing short of a scientific breakthrough, says DFO’s Regional Science Director for the Gulf, Matthew Hardy.

Coupled with acoustic and visual monitoring, the satellite imagery will help the department understand the movements and behaviors of endangered mammals, more than a third of whose global population is believed to frequent Canadian waters, Hardy says.

The data collection should also allow for the development of predictive models of the species to assist DFO in the management and implementation of protection measures.

Real-time detection is not possible at this time, but the rapid evolution of the technology bodes well for the future, he says.

While satellite imagery has several advantages, including the ease of covering a vast territory in a few clicks, it remains dependent on weather conditions, data processing time and the cost of using the technology, Hardy says.

The project is financially supported by the $5.3 million allocated to the WhaleIdeas initiative by the Canadian Space Agency and DFO, in collaboration with Transport Canada.