After three weeks of sailing the Gulf of St. Lawrence, the Blue Expedition project dropped anchor in Havre-Aubert on Sunday.

Between August 26 and September 11, the team aboard the sailboat EcoMaris accumulated at least a hundred hours of navigation between Sept-Îles, the Lower North Shore, Newfoundland, Anticosti Island and the Magdalen Islands. 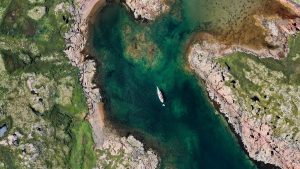 Of the 16 crew members, seven women from the LGBTQ2+ community and from a variety of research sectors were brought together to document plastic pollution and report on climate change in the St. Lawrence and its shores.

The Blue Organization, an environmental conservation organization, led the project, which proved to be a fascinating human experience, between the smallness of the cabin and the immensity of the gulf, says the expedition leader, Anne-Marie Asselin.

She testifies to her observations regarding climate change and to having been alarmed by the quantity of plastic garbage that invades the Quebec coastline.

In addition to the scientific publications that will result from the voyage, popular content will be produced, including a documentary series. 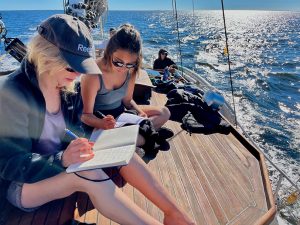 The adventure also served as a creative residency from which a collection of texts, among other things, will be produced, explains teacher and writer Camille Deslauriers.

An exhibition will also be set up with the quarter of tons of waste collected during the expedition, says Anne-Marie Asselin.

For the moment, the crew will proceed with the cleaning of the sailboat, which has dropped anchor in Havre-Aubert, and pack up.

The researchers’ paths will separate for a while, as some will return home while others will enjoy the Islands before embarking on post-production, laboratory analysis and the continuation of creative activities.

Will there be a Blue Expedition number 2?  As early as next summer and for a longer period of time, Anne-Marie Asselin energetically hopes so.